Free to Be.... A Family is the print sequel to Marlo Thomas' Free to Be.... You and Me book, and both tomes were tied-in to an overall project incorporating a TV special and an album sharing the same title. The book is an anthology containing a variety of stories, poems, comics, and songs emphasizing diversity among families (challenging traditional stereotypes), belonging and independence, ecology, sibling rivalry, peer pressure, disabilities, and "the global community."

Kermit the Frog, who participated in the tie-in special and album as well, is listed as a contributor, supplying a three page print version of "On My Pond," with the help of Sarah Durkee (contributing editor) and Christopher Cerf (editor). Tom Cooke provides illustrations, the sheet music is also included, and a biographical sketch of Kermit appears at the back.

In addition to Durkee and Cerf, who worked on other pieces as well, Norman Stiles (also a contributing editor) wrote or co-wrote three pieces: "Another Cinderella," about stepfamilies who bend over backwards to give attention to a new sibling; "The Kingdom with No Rules, No Laws, and No King," about how children and even adults need rules; and "We Need a Bigger Turkey," with Cerf, a poem about a Thanksgiving dinner to which everyone on earth is invited. Paul Jacobs provided sheet music arrangements and, with Durkee, co-wrote the title song and "Thank Someone."

Other Sesame Street writers/composers also participated: Jeff Moss (writing a narrative poem about a girl who is pressured by her parents to entertain guests against her will), Mark Saltzman (penning a Superman comic about adoption, with cameos by Batman, Robin, and Supergirl), Emily Kingsley (the poem "Just Like Me," about Special Ed kids and featuring illustrations of her son Jason), and Carol Hall (the song "Something for Everyone," about how families come in different sizes, shapes, and cultures).

Much of the same material, in some cases performed by the authors, appeared on the album. 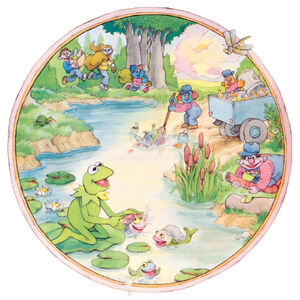