Friends to the Rescue

Friends to the Rescue is a Sesame Street home video release of the hurricane saga that originally aired as a five-part series of episodes in 2001. These episodes were edited together, removing all inserts and a number of Street scenes. The video features a title sequence (with a Big Bird voiceover) and scene transitions animated by Mike Pantuso.

Scenes 4 and 8 are excluded.

Scenes 1, 3, 5, 6, and 7 are excluded. The flashback of Luis sitting on a Honker egg is expanded, while the flashback featuring Lea Salonga singing "A Little Bit" is omitted.

Scenes 1 and 7 are excluded. I. M. Pig's line referencing the Twin Towers is redubbed.

Scenes 1 and 2 are excluded. Big Bird's dialogue in the closing scene is redubbed. 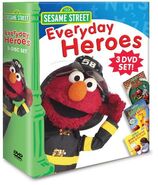