Kermit the Frog and Robin sang "Friendship" in episode 519 of The Muppet Show while helping a mother and baby whale hide from a band of pig whalers. Kermit to pigs: "Listen, whales are scarcer than hen's teeth these days thanks to you guys." The skit was later adapted into a storybook, The Whale Tale.

Previously, Ethel Merman and Fozzie Bear sang an excerpt from the song during a medley in episode 122. Merman sang the song in Cole Porter's 1939 Broadway musical DuBarry Was a Lady. The song was later interpolated into revivals of the musical Anything Goes.

Rowlf and Jimmy Dean sang this song on the The Jimmy Dean Show on multiple occasions (including February 27, 1964 and, shortened, on February 18, 1966) and again for their last appearance together on The Ed Sullivan Show.

Miss Piggy sang "Friendship" as a duet with host Dolly Parton in a 1987 episode of Dolly.

Jerry Nelson and Louise Gold performed a duet of the song at the Sesame Street wrap party for Season 23. 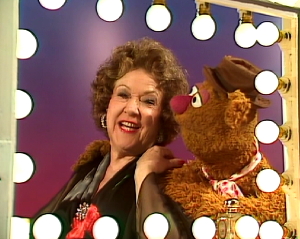 Retrieved from "https://muppet.fandom.com/wiki/Friendship?oldid=1180411"
Community content is available under CC-BY-SA unless otherwise noted.