Another version was used on the Sesame Street video Kids' Favorite Country Songs, featuring CG animation of Froggy and Mousey, courtesy of Magnetic Dreams. In their Muppet forms, Froggy and Mousey later join Elmo and Elmer.

The song has many variations and is sometimes referred to as "A Frog He Would A-Wooing Go." That title, however also refers to another folk song that, although it tells a similar story, has very different music and lyrics. 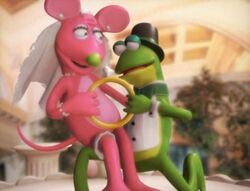 In The Muppets episode "Because... Love", Jack White says he thought Kermit and Miss Piggy's song was "Froggy Went A Courtin'."

Retrieved from "https://muppet.fandom.com/wiki/Froggy_Went_A_Courtin%27?oldid=1159038"
Community content is available under CC-BY-SA unless otherwise noted.