Fruta Manzana is an animated spoof of Carmen Miranda who appeared in two segments, created by Don Duga and Irra Verbitsky, for Sesame Street. Like Miranda, she sang and danced, wore an oversized fruit hat, and also had a singing mirror.

The segments originally aired as early as season 10. The two segments, running close to two minutes, were produced by Polestar Studios.

She can be seen giving an apple to Snuffy, in the end credits of Sesame Street's 50th Anniversary Celebration. 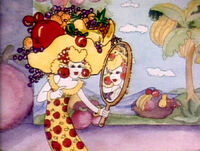 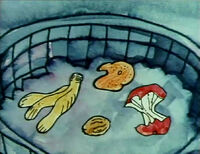 "When The Place Is Clean"Director/Animator: Irra Verbitsky
Community content is available under CC-BY-SA unless otherwise noted.
Advertisement