Furgus Fuzz is one of the main characters of the Sesame Street co-production, The Furchester Hotel.

Furgus, husband of Funella Furchester and father of Phoebe Furchester-Fuzz, serves as a jack-of-all-trades at the Furchester Hotel. He specializes in the hotel's repair needs, but (similar to Grover), he takes on several other jobs around the hotel as needed. 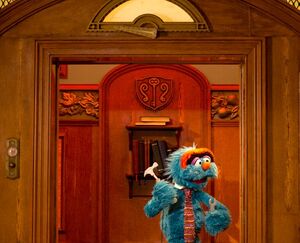 Furgus works on the lift.
Add a photo to this gallery

Retrieved from "https://muppet.fandom.com/wiki/Furgus_Fuzz?oldid=1090972"
Community content is available under CC-BY-SA unless otherwise noted.