Günni is a talking toilet inside the giant carrot house where Wolle and Pferd live, in the Sesamstrasse spin-off series Eine Möhre für Zwei.

He's a little cocky, tells endless stories about his adventurous life, his famous ancestors, and the many jobs he's had throughout the years, but he has a good heart.

A strong affectionate friendship develops between him and Knuspel in Sesamstrasse's first TV-movie, Das Geheimnis der Blumenfabrik. In the spin-off's fourth TV movie, Alarm im Zirkus, he gets kidnapped by circus folk to serve as their next attraction.

Günni was not built by the Jim Henson Company, but by Franz Auer, the German co-production's in-house Muppet wrangler. 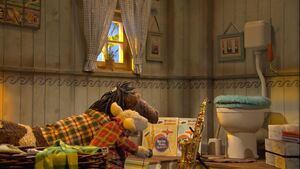 Practicing his saxophone for... 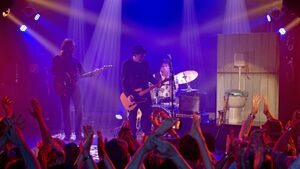 ...his big concert.
Community content is available under CC-BY-SA unless otherwise noted.