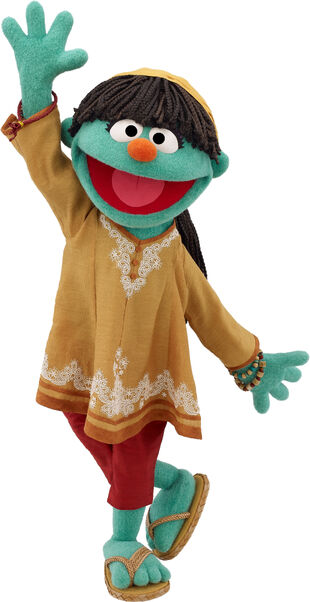 Production of the show is based in Delhi, but crew traveled the country to tape segments. Filming of the first 65 episodes began in February 2006. The series first aired on August 15, 2006 on Cartoon Network India and Pogo. The series is accompanied by a similarly-structured radio program, a move that follows the success of South Africa's Takalani Sesame. The distribution of the radio show is unknown.

Funding for the initial development phase of Sesame India was provided through the support of the United States Agency for International Development (USAID) and ICICI Bank.

“Sesame Workshop's mission is to create innovative engaging content that maximizes the educational power of media to help children reach their highest potential. As with all our adaptations, we are now working with local experts to identify Indian children’s issues and how to best address them on- and off-air. We're thrilled to work with Turner, the undisputed leader in Indian kids' television, to build a long-term presence and to together serve the children of the amazing Indian sub-continent.”
—Gary E. Knell, Sesame Workshop's President and CEO.

From the UK newspaper The Independent:

“India is to get its own version of the children's programme Sesame Street, complete with a giant psychedelic lion who is supposed to be descended from maharajahs and who loves bhangra music. The television show, which will be launched this summer, has been adapted for Indian children.The main action will take place in a galli -- one of the narrow side streets that are choked with cycle-rickshaws, cows and market stalls.

The Indian version, named Galli Galli Sim Sim, will be centered on a corner store rather than a bakery, as in the American show. Elmo and Big Bird are expected to make an appearance. But they will be joined by four puppets created for Indian audiences by puppet designer, Ed Christie, the most exotic of which is Boombah, a lion with red, blue and purple fur, who is supposed to hail from the royal family of Boombagarh. There may be a slight satirical note in the fact that Boombah is something of a party animal - the scions of several of India's old royal families have a reputation for enjoying the party life.

The central character will be Chamki, a puppet of a five-year-old girl dressed in the uniform of a government school. Her best friend is Googly -- named, of course, after the cricket delivery. And there is Aanchoo, a storyteller who is transported to another place when she sneezes.

The producers say the cast will represent the range of India's different ethnic and regional peoples. So the owner of the corner store, played by a human actor, will speak several Indian languages, while his wife comes from the north-east, where you are more likely to find noodles than chicken tikka.”

Episodes were similar in format to that of the originating series. The show consisted of Street scenes, segments (some filmed locally with Indian actors and children, some Indian animation, some are classic American Muppet skits dubbed in Hindi) included four Indian Muppets specially created for the subcontinent's children. The puppet characters included Indian boy and girl Muppets, a character based on traditional Indian folk tales and an animal Muppet.

About 157 million children in India tuned in to the show from on Indian children's TV channels Turner's Cartoon Network and POGO.

In a country with more than 15 official languages — not including English — Turner and Sesame Workshop had their work cut out deciding which language the show should be broadcast in, but have decided to launch the first season's shows in Hindi, with a few English words in each episode.

However, producers hoped to make Sesame India available in other languages, and had plans to broadcast the program on Indian radio. As of 2018, the series launched in Kashmiri and Urdu.[1]

Producers, who worked with Indian educational experts on the show's content and teamed up with Sesame Workshop to design Sesame India's set and characters, say the shows will reflect India's rich cultural diversity and heritage while helping youngsters to read and write.

Bert and Ernie's Great Adventures was added to the show in season 6.

New in season 8 was an animated Bert and Ernie math segment.

In the show's 2nd season, more Muppets were added to the street:

In the show's 3rd season, more Muppets were added:

“I am extremely happy that a revolutionary pre-school kids’ television series, Galli Galli Sim Sim, is launching in India. I am sure that the compelling educational content that the programme has to offer will change the face of young kids’ education in India, just like the globally renowned Sesame Street show has in many countries across the world. For me, Sesame India’s local version, Galli Galli Sim Sim, in days to come, will become an asset to Indian kids’ education as well as provide a new direction in teaching kids to love, understand and celebrate India’s diversity and rich culture. I wish Turner, Sesame Workshop and Miditech the best of luck in this landmark venture - Galli Galli Sim Sim.”
—Honorable Minister of Information & Broadcasting and Parliamentary Affairs, Priya Ranjan Das Munshi, in a congratulatory note.