Geena Davis (b. 1956) is an American actress well-known for her roles in Beetlejuice, The Fly, A League of Their Own, Thelma & Louise and The Accidental Tourist (for which she won an Academy Award). She won a Golden Globe for her portrayal of the first female President of the United States in ABC's short-lived series, Commander-in-Chief.

Davis guest starred on Sesame Street with a cameo in the "Monster in the Mirror" celebrity music video and appears in a documentary commemorating the life of Sesame composer Joe Raposo. She also played Eleanor Little in Stuart Little 2, which included effects by Jim Henson's Creature Shop.

An accomplished athlete, she placed in the finals for the 2000 Olympic Games in the women's archery category. She is also an active spokesperson and founder of the SeeJane program which aims to increase the percentages of female characters in media made for children, and serves as a board member of the national non-profit Dads and Daughters organization. 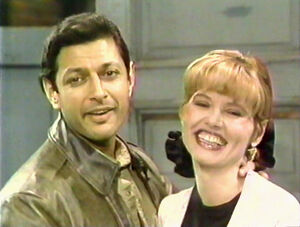 Jeff Goldblum and Geena Davis singing "Sing" in Sing!
Add a photo to this gallery

Wikipedia has an article related to:
Geena Davis
Retrieved from "https://muppet.fandom.com/wiki/Geena_Davis?oldid=1155884"
Community content is available under CC-BY-SA unless otherwise noted.