George is an Anything Muppet boy who sings "Two G Sounds" with Grover.

He also appeared in a sketch attempting to sell sugar to the public, until he combines his efforts with two other kids (selling lemons and water) to start a lemonade stand. (First: Episode 0335) 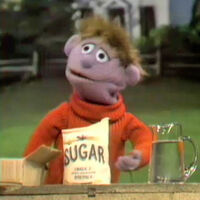 George in the lemonade segment.
Community content is available under CC-BY-SA unless otherwise noted.
Advertisement