Georgie is an Anything Muppet man who appears in Sesame Street Episode 3699, one of several passersby who happen upon the street while its famous lamppost sign is missing.

As Telly tries to write out a temporary sign, Georgie gleefully strolls down the street planning to meet his "sweetie pie" under the sign. Upon realizing it's gone, he grows worried and decides to look elsewhere. Moments later, Georgie's girlfriend wanders by and, when she sees the sign isn't there, frantically runs off to find him. At the episode's end, when the Sesame Street sign is reinstated, the two finally reunite under the lamppost. 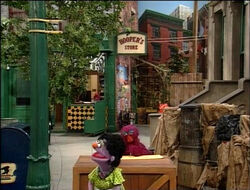 Georgie's girlfriend.
Add a photo to this gallery
Retrieved from "https://muppet.fandom.com/wiki/Georgie_(Anything_Muppet_man)?oldid=1280825"
Community content is available under CC-BY-SA unless otherwise noted.