This exclusive figure of Sam the Eagle was produced by Palisades to be sold at Wizard World Long Beach 2004 and through the Palisades Collectors Club.

The figure is based on Sam's appearance as Samuel Arrow in Muppet Treasure Island. In the movie, Sam is cast overboard by Long John Silver. When he turns out to be all right, he surprises the pirate crew that are guarding the Hispaniola by dressing up as a ghost, covering himself with seaweed and white powder.

The figure is a variant of the Sam Arrow Action Figure from series 4. His tail is a loose piece. A layer of white and gray paint is added to make him look like a ghost. He is looking to the side. The figure comes with plastic seaweed. 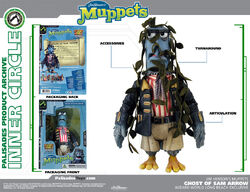 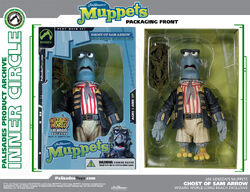 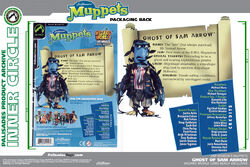 Ghost of Sam Arrow - Packaging Back 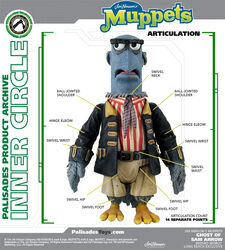 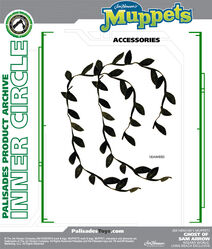 Ghost of Sam Arrow - Accessories
Add a photo to this gallery

Retrieved from "https://muppet.fandom.com/wiki/Ghost_of_Sam_Arrow_Action_Figure?oldid=1091133"
Community content is available under CC-BY-SA unless otherwise noted.