The Giant Chicken appeared in episode 206 and episode 207 of The Muppet Show.

This large scale chicken was based on the chicken costume worn by Harvey Korman in episode 110, with an opening in the beak for the face. Refurbished as an actual puppet for episodes of The Muppet Show, the giant chicken returned to its roots as a regular costume in The Muppets Take Manhattan, where it was worn by "Margaret," Gonzo's boat driver at the aquacade. 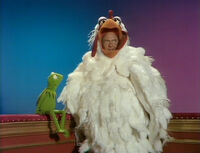 Harvey Korman on The Muppet Show

Retrieved from "https://muppet.fandom.com/wiki/Giant_Chicken?oldid=1091139"
Community content is available under CC-BY-SA unless otherwise noted.