Ginger Rogers (1911-1995) was a dancer, singer, and actress. Best known as the dance partner of Fred Astaire, Rogers made 73 films (10 with Astaire, including Top Hat), and won the Academy Award in 1940 for her dramatic turn in Kitty Foyle. She was one of the many Hollywood stars who attended the gala party on April 6, 1979 to celebrate the release of The Muppet Movie, which was taped as The Muppets Go Hollywood. She can be seen arriving at the beginning.

She began her career in Vaudeville, leading her to her Broadway debut on Christmas day in 1929. The following year saw her first pairing with Astaire in the Broadway show Girl Crazy, although he served as strictly as a choreography assistant behind the scenes. The pair made their screen debut in 1933 with Flying Down to Rio. 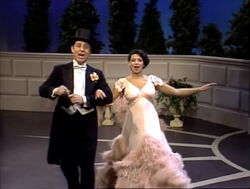 Maria and Luis taking on the role of Fred and Ginger. 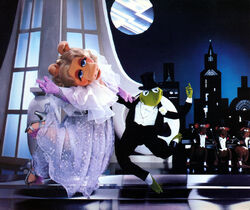 Miss Piggy and Kermit as Fred and Ginger in Top Hat.

Wikipedia has an article related to:
Ginger Rogers
Community content is available under CC-BY-SA unless otherwise noted.
Advertisement