Ginnifer Goodwin (b. 1978) is an American actress, best known for her roles in such films as Big Love and Mona Lisa's Smile, voicing Judy Hopps in Zootopia, and portraying Snow White on the ABC series Once Upon a Time.

Goodwin appeared in a Word of the Day segment during Sesame Street's 44th season, presenting the word "adventure" with Abby Cadabby. She also filmed a short spot about Rosh Hashana for the Shalom Sesame website.(video) 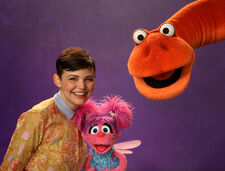 Add a photo to this gallery
Wikipedia has an article related to:
Ginnifer Goodwin
Retrieved from "https://muppet.fandom.com/wiki/Ginnifer_Goodwin?oldid=1245150"
Community content is available under CC-BY-SA unless otherwise noted.