Gladys is a cafeteria lady who wore sparkly, green glasses over the bushy, gray hair that obscured her eyes.

Gladys first appeared in episode 301 of The Muppet Show, in which she worked alongside the Swedish Chef in The Muppet Theatre's new canteen. She only appeared in the first half of the third season, though, making her final appearance in a cameo in The Muppet Movie.

In the fourth season of The Muppet Show, the role of the cafeteria lady was played by Winny, another Richard Hunt character. Winny's tenure on the show, however, was even shorter than Gladys', and the canteen set was entirely dropped from the show by its fifth season.

Gladys, like many previously abandoned characters, has since made several appearances in The Muppet Show Comic Book, including in the Muppet Sports and Swedish Chef sketches in the first issue of The Treasure of Peg-Leg Wilson.

According to The Muppets Character Encyclopedia, Gladys changed her name from Sally after getting a deal on a necklace with the name Gladys.

The Muppet Show Fan Club volume 1 issue 3 mentions a character trait that never made it to the show, that she's always the first to provide the bad news - and that if there is none, she invents some bad news.[1] 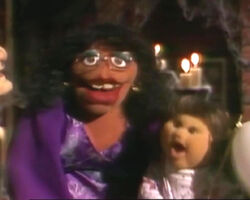 , later made an appearance as a mother in the Ghost of Faffner Hall episode "Music Brings Us Together."