One of the main locations in Fraggle Rock, this cave is shared by best friends Gobo and Wembley Fraggle. Their beds are holes carved into the cave wall, Wembley's up above (which he accesses using a ladder) and Gobo's below. There is also a nook where they build a fire.

Several of the walls are decorated with postcards from Traveling Matt, and a "window" at the upper level looks out onto the caves in Fraggle Rock, showing visitors before they arrive.

For filming of the Ben Folds Five music video "Do It Anyway" in 2012, the room was rebuilt and redecorated with different vines and mushrooms growing all around.

The cave that would become Gobo and Wembley's room has a long history in Fraggle Rock. It used to be a jail, back in ancient times when Fraggles still had such things. Many years later, it was the home of young Traveling Matt (top bunk) and his Uncle Gobo (bottom bunk).

Matt ultimately inherited the cave, where he raised his nephew Gobo. When Matt left for Outer Space at the beginning of the series, Wembley moved in with Gobo, creating the arrangement that spanned the rest of the series. 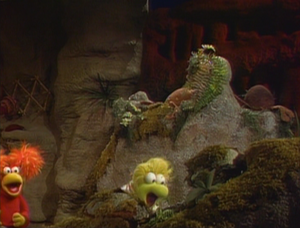 A rare view of the other side of the room, seen in "Wembley's Wonderful Whoopie Water" 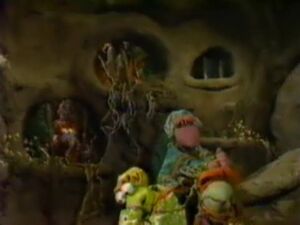 The room as it was in ancient times, seen in "Mokey, Then and Now" 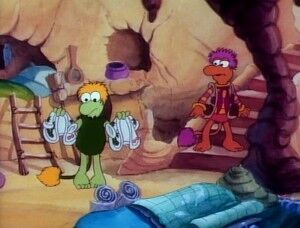 The room as seen on the animated version of the show 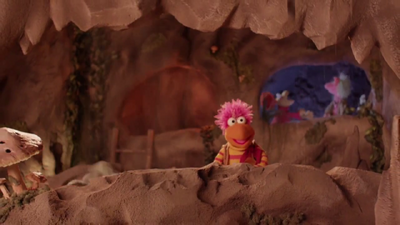 In Ben Folds Five's music video "Do It Anyway" (2012)
Add a photo to this gallery
Retrieved from "https://muppet.fandom.com/wiki/Gobo_and_Wembley%27s_room?oldid=1299453"
Community content is available under CC-BY-SA unless otherwise noted.