Going Places is a 1988 Sesame Street storybook about various modes of transportation.

Big Bird and Little Bird are seen piloting an airplane.

Cookie Monster is a railroad conductor, as seen on the book's cover.

The Honkers man a fire truck and add their own noise to that of the siren.

Telly Monster delivers newspapers to Hooper's Store on his bicycle.

Ernie dozes in a car aboard Bert's ferryboat.

Rodeo Rosie drives through the desert in a Jeep, scattering some cows.

Ernie steers a tugboat with Bert aboard.

Grover flies a blimp past the Empire State Building.

Several of the Muppets are depicted both as youths and as professional drivers, pilots, and so on. For example, Betty Lou is shown driving an ambulance wearing a paramedic's uniform, as well as wearing her trademark dress while standing on a street corner with Elmo watching Telly deliver his newspapers.

Liza Alexander is credited as a co-writer in the 1998 reissue. 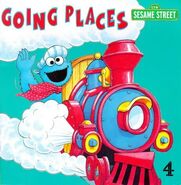 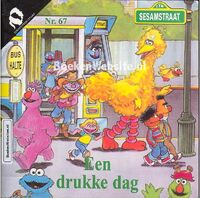