"Goldfinger" is the theme song to the 1963 James Bond film of the same name. Shirley Bassey, who first recorded the song, reprised her performance for the closing number on episode 504 of The Muppet Show. She sings the song in a gold vault. During the number, a group of pigs (led by Link Hogthrob, costumed as Auric Goldfinger) steal the gold. At the closing, Shirley is accused of the theft. 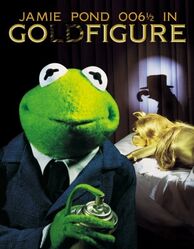 Wikipedia has an article related to:
Goldfinger
Retrieved from "https://muppet.fandom.com/wiki/Goldfinger?oldid=1091277"
Community content is available under CC-BY-SA unless otherwise noted.