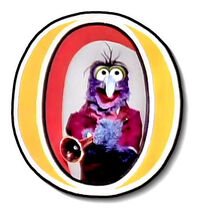 During the first season, Gonzo hit the Muppet Show sign's letter O like a gong, with the following results...

From season 2 onwards, Gonzo would appear inside the Muppet Show sign's letter "O" and try to blow a note on his horn, with the following results...

When The Muppet Show was repackaged for re-runs, the opening theme for season one episodes was replaced with a version of the theme as it was re-shot for subsequent seasons. In these instances, Gonzo's trumpet gag is recycled from another episode. 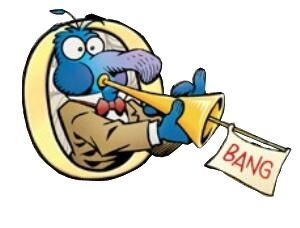 Gonzo's antics within the title have continued on into The Muppet Show's comic book series.

The Treasure of Peg-Leg Wilson