Gonzo's Royal Flush is the plumbing business Gonzo owns and operates after he has left the Muppets (apparently returning to his roots), as seen in the 2011 film The Muppets. Gonzo has in fact risen to become "the richest plumbing magnate in the Rust Belt."

The company bills itself as the proudest porcelain purveyors, has business connections in Beijing, and a waterless toilet department (results to date have been messy, but Gonzo urges them to keep trying). Fozzie finds the executive line of used toilets to be especially comfy.

Employees include Camilla, sensibly attired in a blue outfit and glasses, and evidently acting as executive secretary or in a similar capacity (she appears to type using the "hunt and peck" system). Although he has been flushed with success, Gonzo has a hand-held Automatic Destroy Plumbing Business, rigged to blow up the factory in the event that he gets back to his pals and returns to show business (which he subsequently does).

Construction for a replica of Gonzo's Royal Flush was underway in Disney's Hollywood Studios for inclusion in the Muppets Courtyard during August 2016. [1] 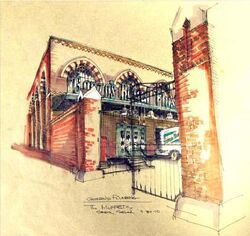 Production design sketch for Gonzo's Royal Flush by production designer Steve Saklad.
Add a photo to this gallery
Retrieved from "https://muppet.fandom.com/wiki/Gonzo%27s_Royal_Flush?oldid=1091312"
Community content is available under CC-BY-SA unless otherwise noted.