"Gonzo's Song" is sung to Camilla the Chicken on episode 318 of The Muppet Show, in which Gonzo tells her that she's prettier than Godzilla and sweeter than wine or vanilla. His song is halted when Big Bird enters the scene.

Gonzo jokingly states before singing that he's worried either Frank Sinatra or Mick Jagger would want to make a recording of his song. 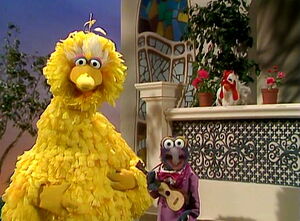 Add a photo to this gallery
Retrieved from "https://muppet.fandom.com/wiki/Gonzo%27s_Song?oldid=1091313"
Community content is available under CC-BY-SA unless otherwise noted.