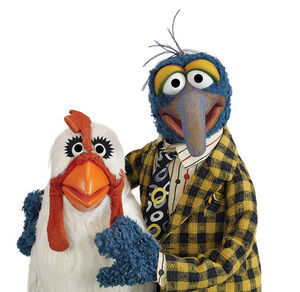 Gonzo's amorous desires are most often centered on chickens. This poultry passion first surfaced in episode 204 of The Muppet Show, when he held auditions for dancing chickens. Dave Goelz ad-libbed the line, "Don't call us, we'll call you... nice legs, though!" After this, the writers decided that Gonzo should have an attraction to chickens.

In Muppet Babies, like his grown-up counterpart, Baby Gonzo also has an obsession with chickens.

Although Camilla is the only chicken with a regular name and personality, there have been instances where Gonzo has referred to other chickens by name. In The Muppet Christmas Carol Gonzo introduces a live chicken to Rizzo named Louise. Gonzo also did a dancing chicken act with a live chicken named Lolita. The Tuxedo Gonzo Action Figure by Palisades Toys includes a pack-in figure of a chicken named Bernice. In the audio commentary for "Bohemian Rhapsody", Gonzo mentions that the other two chickens in the video besides Camilla are named Ethel and Stephanie.

“We tried to explain the chickens in one of the drafts, but we gave up. We decided these aliens, for whatever reason, just think chickens are the greatest.[2]”

“A pivotal moment was when he tried to put together a dancing chicken act. There were some scenes in which he was auditioning chickens backstage, and I ad-libbed a line that has formed a large part of his character ever since. As usual, Mike the animal trainer promised that the chickens would be able to do whatever we asked as long as he had three weeks to train them. So he got his three weeks, and when they came in, they wouldn't dance. Not one step. By the way, Jim had a thing about chickens. He just thought they were hysterical. That's why we were using them. So we were shooting, and Gonzo says stuff like, "Do a little timestep for me." And the chicken just stands there. "Well, how about a pirouette? Do something. Anything." The chicken just stands there. Finally, the chicken turned around and walked out, and Gonzo called after her "Don't call us, we'll call you." Then he turned to the camera and said, "Nice legs though!" Jim cracked up. That weird attraction to chickens just made him so strange, and it was something Jim liked a lot. So Gonzo soon got a chicken girlfriend, Camilla. Whenever it came time to shoot with Camilla, we could never remember what color her eyes were. Sometimes we used blue, sometimes green, and so forth. So Jim and I developed this theory that Gonzo actually couldn't tell the difference between the chickens, and whatever chicken he could get to come along with him, he would call Camilla. Chickens, being limited intellectually, were happy to go along with this.[3]”

“Jim and I used to talk about it - that Gonzo is just an opportunist really. Any chicken is as good as any other chicken - as long as it's a hen. So the chickens don't know any different, cause they're not that bright. If you've ever spent any time with chickens, you know they're operating at a baseline. (YouTube)”

“It's just physical. I don't think it's any lasting attachment. The way it happened was, Gonzo had a crush on Piggy on the first season of The Muppet Show, and she would just deck him with a karate chop. And then the writers decided Gonzo would audition dancing chickens. And they arranged with our animal trainer, Mike, to train some chickens to dance. Mike said, "Well, I can do it, but I'll need three weeks."

He claimed he could teach real chickens to dance. And so the day of the shoot came, and the chickens came in, and they just didn't do anything. And Jim just loved this—he loved chickens 'cause he thought they were so silly. We had Gonzo set up in the basement of the theater on a box, and somebody outside the door would throw a chicken in, and the chicken would walk around, and I would ad-lib. I had to ad-lib, because we didn't know what the chicken was going to do. All they did was walk in and peck at the floor a few times, and then walk off the set…. I had Gonzo look to the camera and say, "Nice legs, though." And Jim just fell apart, he thought that was so hysterical. So that's how Gonzo's fixation with chickens started.[4]”

“It's interesting you ask me that! A lot of people would maybe want to discuss that with a chicken. But that would be a tabloid angle ... I appreciate you coming to me directly. Because chickens aren't too articulate, and their memories aren't that good. So what's with me and the chickens? Truthfully, it's mostly physical. And between you and me, it's the legs! I love the legs.[5]”