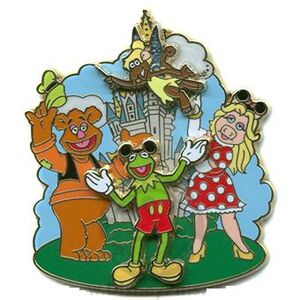 Goofy is one of the star animated characters from the Walt Disney Company. The character first appeared in a 1932 short, originally named Dippy Dawg. The character evolved over time into a dimwitted klutz, best known for his many "How To" cartoons and shorts pairing him with Mickey Mouse and Donald Duck.

In an interview with the Associated Press, Caroll Spinney commented about the creation of Big Bird. "Then came the question of what the bird sounded like. Jim suggested Goofy, Mickey Mouse's friend, but that turned out to be a slightly wrong lead. What came out was a drawl that was hard for children to understand."[1]

Wikipedia has an article related to:
Goofy
Retrieved from "https://muppet.fandom.com/wiki/Goofy?oldid=1244744"
Community content is available under CC-BY-SA unless otherwise noted.