Google is an Internet search engine, e-mail service provider, online map provider, video sharing, and social networking website. Founded by students at Stanford University in 1998, it is the most visited website in the world.[1] The company also owns the video sharing site YouTube.

In 2006 Google's Internet satellite and map service, Google Earth, received the Jim Henson Honor's special Technology Honor. The award is given annual to individuals and products that "reflect the core values and philosophy of Jim Henson and the company he founded." The Jim Henson Honor's announcement stated that "Google Earth has used technology to bring the world a little closer and make the ends of the earth not seem quite so far away. Frankly, it is just the coolest thing out there."[3]

On the Google main page, anniversaries, special events, famous birthdays, and other occasions are highlighted with special artwork incorporated into the Google logo, referred to as "Google Doodles." On Wednesday, November 4th, 2009, Google featured Big Bird's legs with a link to search results for Sesame Street's 40th anniversary. This was followed by representations of other Sesame Street characters on following days.

Sesame Workshop's online store made a T-shirt with each design for free with any order including 40th Anniversary merchandise on the corresponding day; for example, the Big Bird design on November 4. These continued on for a week.

Google's official blog commented on the company's partnership with Sesame Workshop and featured a link to the song "Google Bugle", an unusual use of the term "google" 16 years before the founding of the search engine. For Sesame Street's final doodle on November 10th, 2009, the blog announced a special birthday surprise, offering a high resolution gallery of the week long doodle celebration. All twelve images are offered as larger, higher resolution images for download. As an added bonus Google even gave a sneak peak into John E. Barrett's photo shoot that yielded the final doodle.

In episode 29 of The Barretta Brothers, photographer Louis Henry Mitchell noted that the shoot took seven hours to pose. Peter Linz was inside Big Bird. 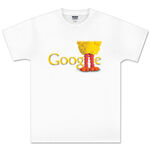 T-shirt available at the Sesamestreet.org shop on 11/4/09 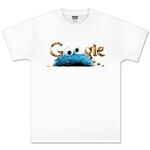 T-shirt available at the Sesamestreet.org shop on 11/5/09 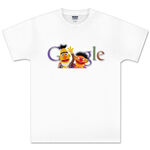 T-shirt available at the Sesamestreet.org shop on 11/6/09 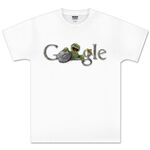 T-shirt available at the Sesamestreet.org shop on 11/7/09 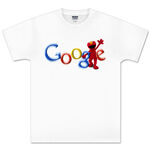 T-shirt available at the Sesamestreet.org shop on 11/8/09 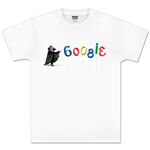 T-shirt available at the Sesamestreet.org shop on 11/9/09 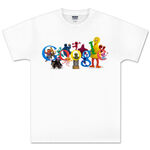 T-shirt available at the Sesamestreet.org shop on 11/10/09

On November 4, some international versions of Google used a special logo depicting a character from a local version of Sesame Street in place of the Big Bird logo, while the United Kingdom and other regions of Europe used a logo marking the 20th anniversary of British cartoon characters Wallace & Gromit. Starting November 5, all international Google sites (with the exception of those that do not use the standard Google logo) used the same Sesame Street logos, starting with Cookie Monster. On November 9, Google's German page used a logo honoring the 20th anniversary of the fall of the Berlin Wall. On November 10, the final Sesame Street doodle made its way to the German Google page as well. 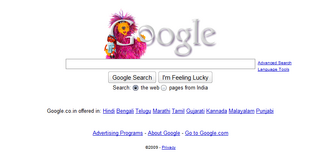 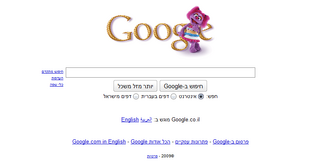 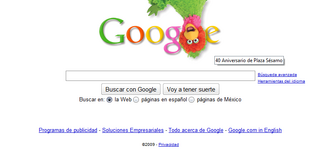 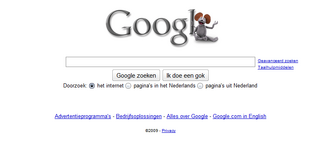 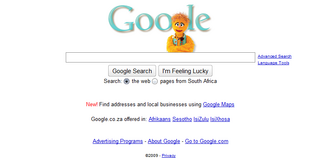 To honor Jim Henson's 75th birthday on September 24, 2011, The Jim Henson Company and Google partnered up to create a special Google logo with six original characters, corresponding in shape and size with the "Google" lettering, that the users could puppeteer themselves. Using a mouse and/or a keyboard, the characters would look up, down, and sideways, and open and close their mouths. Special animations could be discovered as well.

The green creature pops up again.

The pink puppet tossing up his glasses.

In April 2010 Sesame Workshop posted two Sesame Street-themed Google Search Stories videos on their YouTube Channel. The videos were made with YouTube's Seach Story Video Creator which allows users to create search videos based on Google's popular Super Bowl ad. The videos posted show comical in-character searches by Bert and Cookie Monster. The characters Google such queries as "foods dat start wit letter c," "why me eyes so googly?," "what to feed pet pigeons?" and "tips for living with a messy roommate." 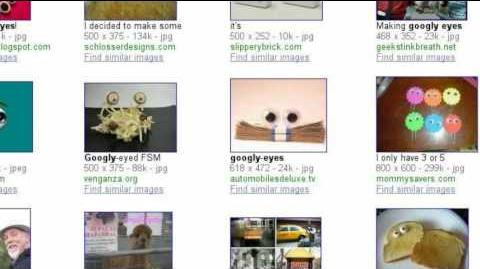 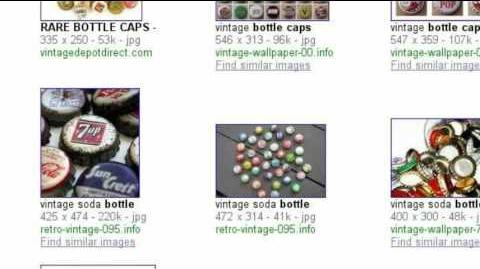 Google is available in various languages, including fictional and comedic languages such as Klingon, Elmer Fudd, and Pirate. One of the faux-languges, Bork, bork, bork!, is based on the Swedish Chef's faux-Swedish. The feature translates the Google site and search results into the comedic language.

In October 2009, national leaders in education, science, technology and philanthropy partnered for the Breakthrough Learning in a Digital Age Forum hosted by Google. The forum set out to discuss and develop recommendations for using digital media for education reform. Included in the forum were the Joan Ganz Cooney Center at Sesame Workshop, Common Sense Media, the MacArthur Foundation, and Google. The forum was held at the Google campus in Mountain View, CA from October 27-28, 2009. Presenters at the two day event represented a wide range of education and technology fields; Joan Ganz Cooney (Sesame Street co-founder), Gary Knell (Sesame Workshop CEO), and Grover (Sesame Street Muppet) made appearances and presentations at the event.[4][5]

Google+ Hangout for The Muppets

On November 7 at 4:30pm PST/7:30pm EST, "The Muppets Google+ Hangout" was held on Google+ social network. Included in the chat were Kermit the Frog and Miss Piggy, Walter and Jason Segel, as well as James Bobin and Nick Stoller.

A Google a Day

During the week of November 28, 2011, the stars of The Muppets shared the daily search questions in Google's A Google a Day game - many of which were Muppet related questions.

Doodle for Google is an annual contest for children from grades kindergarten through high school to create their own Google Doodle to eventually be featured on the site's homepage.

Brian Henson served as a guest judge for the 2013 competition.[6]

Kermit the Frog was announced as one of the judges for the 2019 competition. He appeared on The Tonight Show with Jimmy Fallon (also a judge) to promote his involvement. 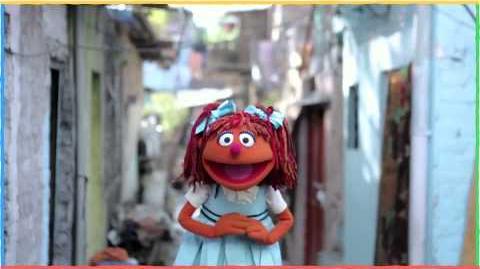 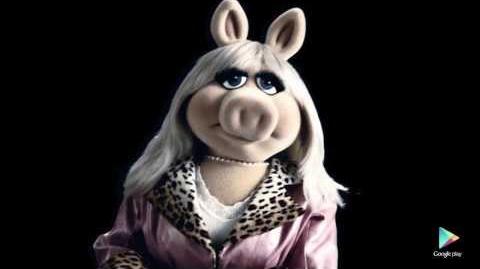 Visit the:
Google Wiki
Wikipedia has an article related to:
Google
Community content is available under CC-BY-SA unless otherwise noted.
Advertisement