Gordon and Susan's apartment is the first floor apartment in the brownstone of 123 Sesame Street. The apartment was used as a hangout spot in the early Sesame Street episodes, particularly the kitchen and dining room area. According to Episode 3507, their apartment is number 1F.

In the first episode, Susan invites Gordon and Sally upstairs for some milk and cookies. They're joined by Bob, who hangs a picture on the wall and Kermit the Frog, who watches Bob's magic trick.

The Sesame cast visit the apartment often in the early episodes, including episode 0008 and episode 0043.

In Episode 2689, the apartment gets damaged in a fire started in the building's basement. Big Bird stayed there for two days while his nest was being rebuilt after a hurricane destroyed it. (Episodes 3976-3980.)

In Christmas Eve on Sesame Street, Gordon is seen hanging stockings for several people in the apartment, including Big Bird. Santa also visits the apartment and decorates it for Christmas.

Starting in Season 46, Elmo's apartment has taken its place. 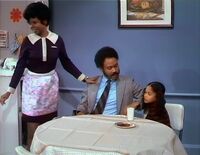 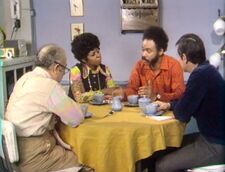 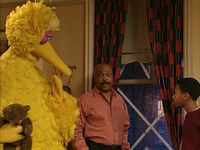 Episode 3976
Add a photo to this gallery
Retrieved from "https://muppet.fandom.com/wiki/Gordon_and_Susan%27s_apartment?oldid=1238188"
Community content is available under CC-BY-SA unless otherwise noted.