Gravity Falls is an animated series that aired on Disney Channel and Disney XD from 2012 to 2016. The series follows the adventures of twin brother and sister Mabel and Dipper Pines, who investigate paranormal happenings with their uncle. 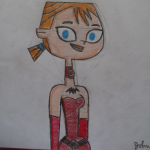