Green Lantern is the name of several characters published by DC Comics since 1940. Created by artist Martin Nodell and writer Bill Finger, the Green Lanterns battle evil using a ring that bestows great powers upon them.

Crichton: So once I get it on, how do I get it to work?
D'Argo: It just, uh, does.
Crichton: Right. Willpower. Like the Green Lantern's ring. 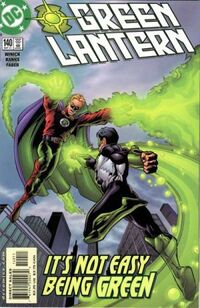 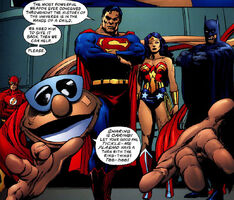 In Green Lantern Legacy: The Last Will and Testament of Hal Jordan (2002) written by Joe Kelly with art by Bret Anderson, Plastic Man molds his face into that of Elmo's and calls himself Tickle-Me-Plasmo. 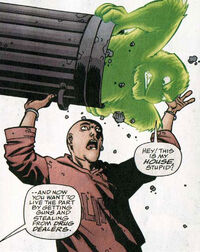 In Green Lantern #162 (2003) by Judd Winick, Kyle Rayner creates his own version of Oscar the Grouch with his power ring. 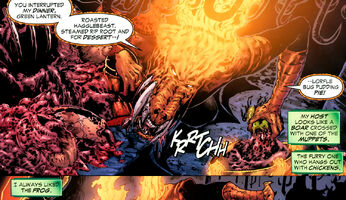 In Green Lantern #41 (2009) by Geoff Johns, Hal Jordan describes Larfleeze as a cross between a boar and a Muppet. 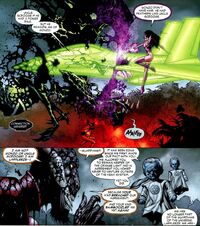 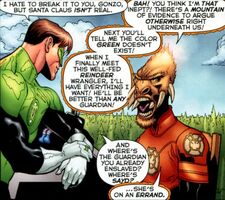 In Green Lantern #56 (2010) by Geoff Johns, Hal Jordan continues to refer to Larfleeze as Gonzo.
Add a photo to this gallery

Visit the:
Green Lantern Wiki
Wikipedia has an article related to:
Green Lantern
Retrieved from "https://muppet.fandom.com/wiki/Green_Lantern?oldid=1276915"
Community content is available under CC-BY-SA unless otherwise noted.