Grover's Bad, Awful Day is a 1986 Sesame Street book about Grover having an unlucky day. After waking up, Grover stubs his foot on his scooter, his toothpaste falls off his brush, he knocks the toothpaste cap down the sink drain, his fur gets tangled in his comb, he spills the milk at breakfast, his mom makes him wear his rubber boots to school, and he leaves his lunch at home without knowing it.

At school, things continue to go poorly for Grover - he shows up late, can't get his drawing of Barkley right, forgets what letter comes after Q in the alphabet, can't honk his nose in music class, and is told that he's too small to play tackle football with the Mighty Monsters. At lunchtime, Grover discovers he left his lunch at home. Betty Lou offers him one of her sandwiches, but things continue to get worse for him when he finds it has strawberry jelly (he only likes grape jelly).

On the way home, Grover and Herry stop to buy ice cream, but his falls off the cone and onto the sidewalk. Then, while walking home in the rain, one of his rubber boots gets stuck to a piece of gum, causing him to abandon the boot and walk home with one wet foot.

When Grover gets home, he tells his mother all about his horrible day. She tells him that everyone has bad days, now and again. The two go and recover his lost boot, and then head off to Hooper's Store for some ice cream sodas. While enjoying his treat, Monty Monster (the leader of the Mighty Monsters) invites him to play tickle football with the Mighty Monsters the next day and he thinks that tomorrow might be a better day.

In order of appearance 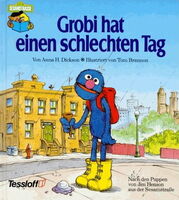