Grover is really excited about his first day of school in Mister Lester's class. He brings his jacks, a new pencil box and a new box of crayons, and his mommy packs him a jelly sandwich for lunch. Unfortunately, nobody wants to play jacks with Grover, he does not get a cookie during snack time, he winds up trading his new crayons for a broken toy truck, he does not like jump rope at recess, and for the worst part, he reluctantly trades his sandwich to Truman for a sandwich he hates: baloney. When Grover starts to cry, a nice little girl in Grover's class named Molly extricates him from his sad situation. Then when asked by Bill to trade pencil boxes, Grover said that he likes his better and Bill agreed and wasn't mad. Grover asked Bill if he likes jacks. Bill said it's his favorite game. After school, Grover, Molly and Bill played jacks and Grover ran home and told his mother that he made two new friends in one day. 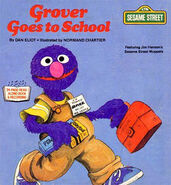 Retrieved from "https://muppet.fandom.com/wiki/Grover_Goes_to_School?oldid=1136383"
Community content is available under CC-BY-SA unless otherwise noted.