Gugu was the Grouch on the original run of Vila Sésamo, the Brazilian co-production of Sesame Street. Gugu is a very loud character, often shouting at everyone he encountered.

As with the show's other puppet characters, Gugu was constructed by Brazilian puppet builder Naum Alves de Sousa and not by The Muppet Workshop. In dubbed versions of Sesame Street videos and other related projects following the Brazilian co-production's cancellation, Oscar is renamed Gugu. 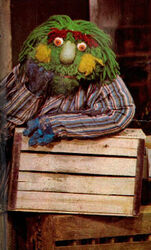 Retrieved from "https://muppet.fandom.com/wiki/Gugu?oldid=1322025"
Community content is available under CC-BY-SA unless otherwise noted.