Gus Hopper, an Anything Muppet insect, received his name in a Sesame Street sketch from the mid-1990s (First: Episode 3238). Upon Bonnie Rabbit's mention of a "grasshopper," Gus hops in to correct her in an irritated manner similar to Benny Rabbit whenever he's called "Bunny." Likewise, Gus also speaks in a tough, scratchy voice, performed by Joey Mazzarino.

He made another notable appearance as a cricket (again performed by Mazzarino, but with a Cockney accent) in a Global Grover segment (First: Episode 4087). In the segment, Grover says that he visited England, where he saw people play cricket. The cricket appears, and repeatedly exclaims "Cricket!" to Grover's dismay.

After the film segment, Grover asks the cricket whether the film clarified what he was talking about. The cricket replies that of course he knew, as he loves the game. He acts as bowler, but frustrates Grover by frequently calling him "guv'nor". Grover tries to correct him, even saying "I have not even held public office!"

The puppet has made sporadic background appearances on Sesame Street as early as 1990, appearing in sketches like "Night Bug Boogie," and an Elmo's World episode about bugs. The puppet was later used as Young Grasshopper for the "Elmo the Musical" segment, "Karate Master the Musical." 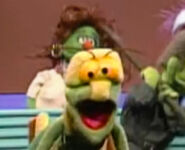 Gus Hopper's brief named appearance.
Add a photo to this gallery
Retrieved from "https://muppet.fandom.com/wiki/Gus_Hopper?oldid=1167673"
Community content is available under CC-BY-SA unless otherwise noted.