Guy Smiley is, by his own account, America's Favorite Game Show Host. He has hosted the Sesame Street game shows "Beat The Time," "Here is Your Life," "What's My Part?" and many others. He approaches every hosting gig with a near-frantic level of excitement and enthusiasm.

Guy Smiley has occasionally demonstrated his musical talent on Sesame Street. His song performances include "Air" and "They Can't Take That Away From Me" (with Cookie Monster). His singing voice at times can go very low, very similar to Link Hogthrob's, as in "I'll Love You in Springtime" and his tribute to the winner in "The Letter of the Day Pageant."

Most of Guy Smiley's appearances in sketches have been as the host of game shows. Many of the sketches where he doesn't host game shows still involve him being the host of a show, including "The Weather Show," "The Letter of the Day Pageant," and "On Vacation with Guy Smiley." One of the few sketches he starred in where he didn't host a show or sing was a sketch where he took his entire studio audience out for lunch. His first appearance was in a sketch where he appears as a spokesman for "Brand X." (First: Episode 0010)

In an interview with Leslie Mostly, Guy Smiley's home, particularly his living room, is shown to be identical to his game show sets. He keeps all his living room furnishings behind curtain #1, his personal organ player Buzz Crescendo behind curtain #2, and a pet studio audience of monsters and Anything Muppets behind curtain #3. He also mentions having a pet dog named Strongheart (whose picture hangs on the wall).

Although Joan Ganz Cooney described Guy Smiley as one of Jim Henson's funniest characters,[1] Jon Stone once recalled that Henson didn't like to perform the character, noting "the voice was so hard on him."[2] Because of this, the dialogue for Guy's earlier sketches was commonly prerecorded, so multiple takes could be filmed without straining Henson's throat.

A walk-around version of Guy Smiley appeared in a number of Sesame Street Live shows. In Big Bird Goes Hollywood, he assisted Big Bird in directing a movie.

In his earliest appearances, he had a visible tongue, a feature that was later seen in 2006, when he hosted a PBS commercial/game show spoof for the Ready To Learn Service.

Following Jim Henson's death, Guy Smiley continued to appear in reused material through 1998. He would then make background appearances in Episode 3820 as one of Maria's customers, and in Episode 4117 as one of the spectators in the Number of the Day segment where The Count was playing golf.

Performed by Eric Jacobson since 2005, Guy has made further appearances on the show, beginning with a featured role in the main street story of Episode 4182. Guy also hosted the later game show inserts "The Waiting Game," "Make it Fit," and "Estimation Vacation."

The original puppet for Guy Smiley was repurposed from a Whatnot design that had appeared in various commercials and TV appearances throughout the 1960s (such as Conrad Love). In 1972, the puppet transitioned to the standard "Orange Gold" model, with a special mechanism that allowed Guy to raise or lower his eyebrows. This particular puppet often doubled as Prince Charming.

In the first season of Sesame Street, the puppet was often cast as a show business type, with a different name in each appearance. His first appearance was as a spokesman for Brand X, and later that season would show up to sing "Gone with the Wind," and as an announcer in the first two Answer Lady sketches (performed by Frank Oz).

The emcee made his earliest named appearance in the game show sketch "Can You Guess?", where he went as "Big Bob." In the sketch, "Pick Your Pet," he was called "Sonny Friendly," a name that would be reused years later for another Sesame Street game show host. The first use of the "Guy Smiley" name was "The Mr. and Mrs. Game."

When Count von Count introduced himself in a Beat the Time sketch, he did so in his traditional way, "They call me the Count because I love to count things." Guy responded with, "Well, I'm Guy Smiley. They call me Guy Smiley because I changed my name from Bernie Liederkrantz." 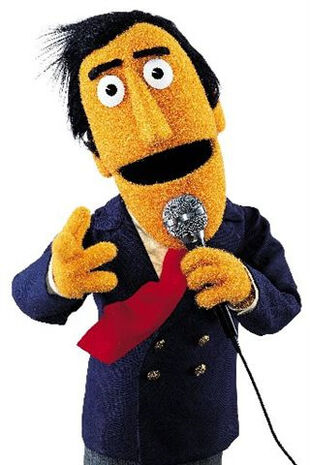