Gwen Stefani (b. 1969) is an American singer-songwriter and fashion designer. She is a co-founder and lead vocalist of the ska band No Doubt, first formed in 1986. During the band's hiatus in the early 2000s, Stefani began a successful solo career as well, spawning the worldwide smash singles "Rich Girl" and "Hollaback Girl."

In a video posted to Sesame Street's Facebook account in September 2014, Raya is seen rocking out to a No Doubt performance at the Global Citizen Festival. (video) 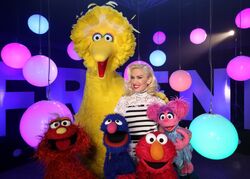 Add a photo to this gallery
Wikipedia has an article related to:
Gwen Stefani
Retrieved from "https://muppet.fandom.com/wiki/Gwen_Stefani?oldid=1071497"
Community content is available under CC-BY-SA unless otherwise noted.