In the 1970s, a series of eight segments on Sesame Street featured a young female gymnast; she had long blond hair and wore a long-sleeved navy-blue leotard. These segments were mostly each about 20-30 seconds or so in length and featured a variety of music (usually mellow) in the background. The gymnast used various gymnastic apparat to demonstrate certain concepts. She first appeared in Season 4 and appeared on a regular recurring basis until Season 14. 'Around'
She swings on a rope around a pommel horse.
(First: Episode 0517) 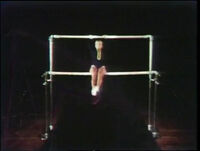 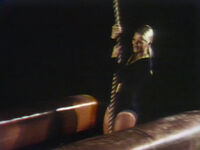 'Between'
She swings on a rope between two pommel horses.
(First: Episode 0542) 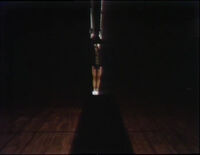 'Close To' and 'Away From'
She repeatedly swings on a pair of rings - to and from the viewer.
(First: Episode 0513) 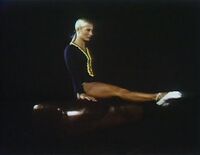 'On' and 'Off'
She mounts a balance beam, dismounts it, then repeats everything in fast motion.
(First: Episode 0526) 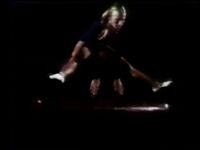 'Over' and 'Under'
She vaults over one pommel horse, rolls under another one, then repeats everything in slow motion.
(First: Episode 0517) 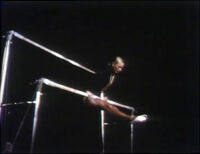 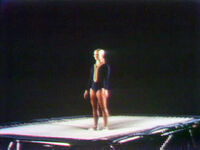 'Up' and 'Down'
She repeatedly jumps up and down on a trampoline.
(First: Episode 0526)
Community content is available under CC-BY-SA unless otherwise noted.
Advertisement