HÖRZU ("LISTEN") is a weekly German TV guide magazine that has been around since 1946 (originally Germany's first radio program magazine).

For the first issue of 1984 (actually dated Dec. 30, 1983), Die Fraggles graced the cover, in the form of Onkel Matt toasting the new year with a glass of champagne, and holding a four leaf clover (symbolizing good luck wishes for the coming year).

The Fraggles went on to grace the cover a few more times over the series run, while other issues featured full page articles on the show (issue #20/1985 explores a pressing question with the article "A Fraggle wonders: Why are people so silly?").

Miss Piggy appeared on the cover of issue #12 of 1984. The image used was part of a parody of Henri de Toulouse-Lautrec's 1893 portrait of Jane Avril, which originally appeared in 1984's Miss Piggy's Art Masterpiece Calendar.

The publisher also distributed a companion magazine, Siehste, billed as a TV guide magazine "for children ages 8 to 14." Published throughout 1979 (officially the "Year of the Child"), the Muppets appeared on the cover three times.

Die Grosse Muppet Show, the German edition of The Muppet Show Book, was sponsored by HÖRZU, with the TV magazine's logo appearing on the cover. 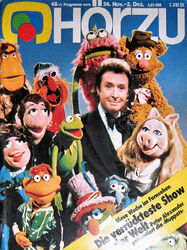 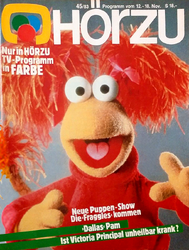 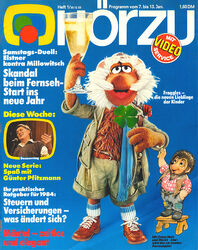 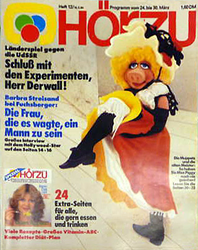 Wikipedia has an article related to:
HÖRZU