Hank Azaria (b. 1964) is an American voice and screen actor, best known for his voice work on The Simpsons (as Moe Szyzlak, Apu, Chief Wiggum, Professor Frink and others). His film credits include Godzilla, Year One (with Jack Black), and Night at the Museum: Battle of the Smithsonian, where he shared a scene with Oscar the Grouch.

Azaria appeared in a season 44 episode of Sesame Street, demonstrating the word "impostor" in a Word of the Day segment. 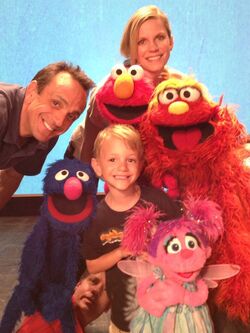 Wikipedia has an article related to:
Hank Azaria
Retrieved from "https://muppet.fandom.com/wiki/Hank_Azaria?oldid=1245151"
Community content is available under CC-BY-SA unless otherwise noted.