Kermit the Frog has made guest appearances on the program, including:

In one appearance he declared his political position as an Amphibitarian. Kermit recalled his guest spots on the show in his 2006 memoir Before You Leap. Kermit wrote:

“I even made appearances on political debate shows like Hannity & Colmbes (sic). I thought I had learned everything about left and right from Sesame Street, but those two guys really taught me a thing or two. (Rather than take sides, I publicly declared my political position as an Amphibitarian. We're opposed to marriages between frogs and pigs.)”

Kermit's political stance as an Amphibitarian would be discussed again while promoting Before You Leap on Fox News Channel's The Live Desk. 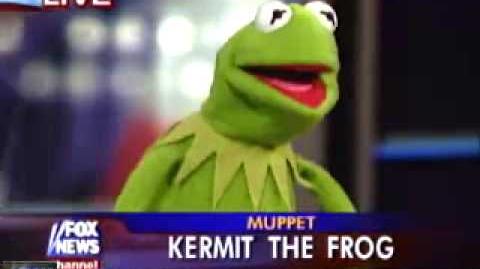 Wikipedia has an article related to:
Hannity & Colmes
Community content is available under CC-BY-SA unless otherwise noted.
Advertisement