Hans Boskamp (1932-2011) was a Dutch actor and former association footballer who dubbed Oscar the Grouch on Sesamstraat, the Dutch co-production of Sesame Street.

He was a good friend of John Lennon. When Lennon and Yoko Ono wanted to protest against the Vietnam War, Hans Boskamp suggested the idea to hold their first of two Bed-Ins for Peace in the Dutch capital, Amsterdam, and personally arranged their stay in the Amsterdam Hilton Hotel.

Hans Boskamp in his early years as an actor 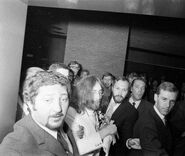 Boskamp exiting the hotel with John en Yoko
Add a photo to this gallery
Retrieved from "https://muppet.fandom.com/wiki/Hans_Boskamp?oldid=1254353"
Community content is available under CC-BY-SA unless otherwise noted.