Hashim Haider is a puppeteer, writer, and actor who performs Akshar Kumar on Galli Galli Sim Sim, the Indian co-production of Sesame Street.

Haider joined the show in 2006 originally as a puppet wrangler. From the second season onwards, he has portrayed Akshar Kumar and helped make him one of the most prominent Muppet characters on Galli. In season 6 of Galli Galli Sim Sim (2013) Akshar Kumar Appeared as a constant character with a new name - 'Hero'. 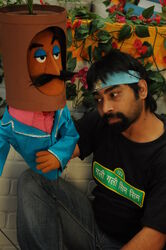 Hashim Haider with "Bollywood Dude" in Galli Galli Sim Sim
Add a photo to this gallery
Retrieved from "https://muppet.fandom.com/wiki/Hashim_Haider?oldid=1235450"
Community content is available under CC-BY-SA unless otherwise noted.