Hawkins is the player character of the Muppet Treasure Island CD-ROM game. In the game, Jim Hawkins is only referred to as "Hawkins," and the character's gender is never referenced, so that both male and female players feel that the characters are addressing them directly.

Because the player takes the role of this character, "Hawkins" is never seen on screen, apart from brief mirror shots of the protagonist's torso below the head (kept suitably generic and unisex). 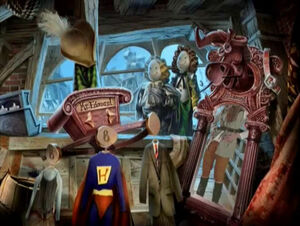 Hawkins' wardrobe and reflection in the mirror.
Add a photo to this gallery
Retrieved from "https://muppet.fandom.com/wiki/Hawkins?oldid=1091871"
Community content is available under CC-BY-SA unless otherwise noted.