Healthy Habits for Life is a multi-year, content-driven initiative launched by Sesame Workshop in 2005 to help young children and their caregivers establish an early foundation of healthy habits. It was also the central theme for Sesame Street's Season 36 in 2005. 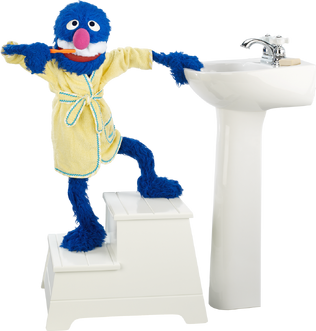 In the early part of the 2000s, childhood obesity became a critical issue in the public mind, and was reinforced as a cause for concern by data published by the US Centers for Disease Control.

Sesame Workshop, as a developer of many kids programs, took interest in promoting healthy lifestyles to its viewers. According to people from Sesame Workshop, "Health has always been a part of our Sesame Street curriculum, therefore we will always be committed to ensuring kids are given information and messages that will help them become healthy and happy in their development. For season 36, we have turned up the dial in health, but it will always be part of our curriculum."

The Healthy Habits for Life programming was launched in 2005, to encourage young viewers to lead more active and nutritious lifestyles.

The Workshop formed an Advisory Board consisting of experts such as Woodie Kessel, M.D., M.P.H., the Assistant Surgeon General of the United States. This board examines the research of other organizations, and also conducts pilot studies to determine which areas of research should be expanded, based on social, ethnic and socio-economic sections of the population.

Several United States Senators, governors and other politicians recorded public service messages with Elmo and Rosita in 2005 and 2006. These PSAs were distributed to state and national television outlets. Topics of the public service messages ranged from the importance of health and nutrition to physical fitness and personal hygiene.

Some of the politicians who joined the Sesame Street characters included:

At the start of every season 36 episode, before the sponsorship list and opening sequence ran, a "Healthy Moment" segment aired. Many of these included celebrity guests, including astronaut Buzz Aldrin, game show champion Ken Jennings, or singer Alicia Keys. Each segment started out with Muppet vegetables, singing a short jingle with the lyrics "Stay happy, and healthy, on Sesame Street."

Seasons 36 and 37 also introduced many new sketches and songs to the show's catalog focusing on nutrition, healthy life styles and hygiene.[1]

Start a Discussion Discussions about Healthy Habits for Life