Heathcote Williams (b. 1941) is an English actor, author, and environmentalist who appeared in the Creature Shop TV movies The Odyssey (as Laocoon who was devoured by a Creature Shop sea monster sent by Poseidon) and Alice in Wonderland (as Mr. Eaglet).

Williams began his writing career as associate editor for Transatlantic Review, and 1964 saw the publication of his first book, The Speakers, a documentary account of public orators at Hyde Park in London. This was followed by such plays as The Local Stigmata, AC/DC, Remember the Truth Dentist, and Hancock's Last Half Hour. 1988 saw the publication of his best known book, Whale Nation, a collection of photographs, poetry, and prose essays about the lives of whales, intended to encourage environmental awareness. He also scripted the docudrama What the Dickens, about Charles Dickens' affinity for magic tricks, and served as "script doctor" on Al Pacino's film The Devil's Advocate.

Williams acting roles are highlighted by Derek Jarman's 1979 film adaptation of The Tempest (playing Prospero), and he has also appeared in Little Dorrit, Orlando, The Browning Version, and Basic Instinct 2. In 1998, he was one of several British actors to guest star on the Friends season finale "The One With Ross's Wedding," appearing as a drunken wedding guest. 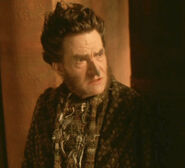 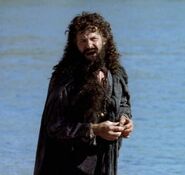 The OdysseyLaocoon
Add a photo to this gallery

Wikipedia has an article related to:
Heathcote Williams
Retrieved from "https://muppet.fandom.com/wiki/Heathcote_Williams?oldid=1151293"
Community content is available under CC-BY-SA unless otherwise noted.