Henry Cavill is an actor most famous for playing Superman in Man of Steel. His other credits include Stardust (based on Neil Gaiman's book), Immortals (as Theseus), the 2002 version of The Count of Monte Cristo (based on the book by Alexandre Dumas), and the Showtime series The Tudors (with Sam Neill).

He presents the word "Respect" with Elmo, The Big Bad Wolf and The Three Little Pigs as The Word of the Day in Sesame Street season 44. 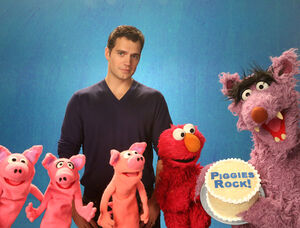 According to Entertainment Weekly:[1]

“Cavill was quite laugh-prone while taping with the Sesame Street Muppets, who had him cracking up when they launched into gags with a prop cake between takes. But Cavill had his chance to get the Muppets and puppeteers giggling too: At one point during shooting, a light high up on set blew out. Leslie Carrara-Rudolph — who was taking a break from puppeteering Abby Cadabby to operate one of the pigs — said, “We have Superman right here. He’ll just fly up and fix it!” And Cavill gamely played along, miming soaring upward with a lightbulb, looking just the part for the Man of Steel, chin up and dignified.

After completing his final take, Cavill turned to the puppeteers sitting around him and took a moment for some sweet gentlemanly praise: “Can I just say, you guys are incredible,” he said. “It’s really remarkable to watch you guys work. I have enormous respect for what you guys do.””

Wikipedia has an article related to:
Henry Cavill
Retrieved from "https://muppet.fandom.com/wiki/Henry_Cavill?oldid=1071647"
Community content is available under CC-BY-SA unless otherwise noted.