Henry VIII (1491-1547) was king of England, infamous for his many marriages. His conflicts with the Catholic church when attempting to have his marriage to Catherine of Aragon annulled led to the establishment of the Church of England. The portrait by Hans Holbein captures the popular image of the later Henry: bearded, overweight, and arrogant. 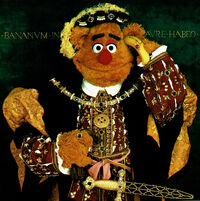 Cookie Monster
Museum of Monster Art
Add a photo to this gallery
Wikipedia has an article related to:
Henry VIII
Retrieved from "https://muppet.fandom.com/wiki/Henry_VIII?oldid=1091971"
Community content is available under CC-BY-SA unless otherwise noted.