Henson.com is the long-time online home of The Jim Henson Company. The site, located at henson.com, first launched in 1997.

The site currently features information on various Henson Company projects and productions - including the company's Family entertainment, sci-fi and fantasy worlds, and their Henson Alternative brands; plus limited coverage of the company's previous work with the Muppets, Sesame Street and Bear in the Big Blue House. Individual pages on each production often include show descriptions, image galleries, character listings, show credits, episode guides, and links to related merchandise, videos, podcasts and press releases.

Aside from information on the company's productions, the site features general company information - including a company overview, biographies of the company's leadership, press releases, media relations and other corperate information. The site also features links to the Jim Henson's Creature Shop website, and the studio's leasing opportunities.

Jim Henson's Red Book is a public blog added to the site on September 24, 2010. The blog features excerpts from Jim Henson's personal journals. 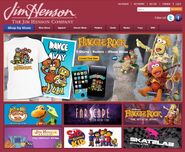 Henson.com used to feature articles like "Ask Henson.com" and "Featured Creature." While Muppets.com has been the online home of the Muppets since 1998, durring the time that company owned the Muppets there was also Muppet-related content on the Henson.com - including games, news, pictures, and production information.

Henson Moment was regular feature on the site from 1997 until 2002. The feature showcased short Quicktime video clips, ranging from 30 to 60 seconds in length, from various Henson productions - including The Muppet Show, Muppets Tonight, Fraggle Rock, The Dark Crystal, Dog City, Time Piece, City Kids, Bear in the Big Blue House, Mopatop's Shop, The Tales from Muppetland, The Muppet Movie and The Great Muppet Caper. Many of The Muppet Show's UK Spots were featured as clips, making them available to US audiences for the first time.

Featured Creature was another regular feature on the site from 1997 until 2002. The section would highlight a different character from various Henson projects. The collection spotlighted Muppets, Creatures, and other characters with mini biographies and exclusive behind the scenes information and images from the Henson Company archives. More than 100 characters were included throughout the run of the feature.

Ask Henson.com was a regular feature on the Henson.com website from 1997 until 2002, written by Jim Henson Company archivist Karen Falk. Falk answered fan e-mail about various Henson characters and productions. More than 85 questions were published throughout the feature's run.

The Henson.comTest was a weekly trivia contest featured on the website from 1997 until 1998. Each week a multiple choice question about the company or one of its productions was posted; and each Wednesday a winner was chosen randomly from among all correct answers submitted. Various prizes, often some of the latest merchandise items, were awarded as prizes to the winners.

In August 2006, the company launched the Henson.com Podcast, an audio (and occasionally video) podcast with news, interviews and other insider information from the company. The podcast was hosted by Grant Baciocco and available at henson.com/podcast or via iTunes.

The podcast also maintained a Twitter account (@hensonpodcast), that gave updates on upcoming and new episodes, and often solicited questions and feedback for interviews and episodes. 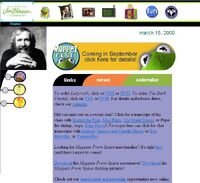 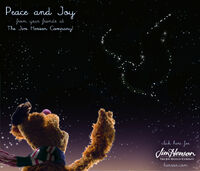 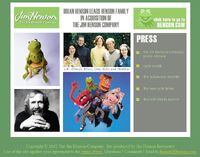 Homepage circa 2004
Add a photo to this gallery

In March 2009 the Jim Henson Company established an official Twitter presence. Twitter, a microblogging and social networking webservice, enables its users to send and read messages text-based posts of up to 140 characters. The company shares regular tweets featuring news, insider information, exclusive pictures and other unique updates. The feed was originally maintained by Allyson Smith, the company's Vice President of New Media; the feed is now run by Henson Company's Interactive Producer Anna Jordan-Douglass. Additional feeds for the company's family entertainment, podcast, stage shows have been launched as well.

The Jim Henson Company maintains a channel on YouTube, a video sharing website owned by Google. The company's channel showcases special videos and clips from their various productions.

Retrieved from "https://muppet.fandom.com/wiki/Henson.com?oldid=1157120"
Community content is available under CC-BY-SA unless otherwise noted.