The patented The Henson Digital Performance System or HDPS, allows puppeteers to bring digital puppets to life in real time. The system's combination of hardware and software allows a puppeteer (or a primary puppeteer and assistants) to perform live three-dimensional computer graphics as well as animatronic characters. In computer graphics applications, the system allows for an unprecedented level of spontaneity and interactivity when compared to conventional forms of computer animation. Jim Henson's first successful use of the real-time technology he hoped to develop was with the character Waldo C. Graphic (though then, much of the final animation was reworked by Pacific Data Images over the original puppeteered movements). The current system provides more detailed real-time rendering.

“We’re having, [I've] got to say, so much fun; because we can improvise...What’s great about puppets are that they are spontaneous, and what we’re trying to do in our 3-D animation, is to really be spontaneous. So we’re really working the material in front of the camera. And we have big projectors, so they can see what [the computer] sees. We’re doing performed animation, and it’s a lot of fun.”
—Brian Henson[1]

The HDPS is partially based on the company's earlier Henson Performance Control System (also known as "Big1"), various versions of which were developed beginning in the late 1980s to control complex animatronic puppets. The system consists of three major components: mechanical hand controls (still called a "Waldo"), a control computer, and a digital puppet workstation which renders the live on-screen image of the character. One version of the system won an Academy Award for Technical Achievement in 1993. 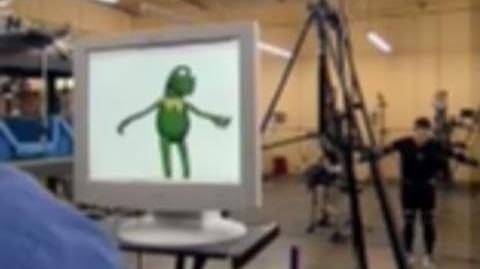 Productions that use HDPS