What is referred to as the "Henson Townhouse" (and less commonly, the "'Muppet Mansion'") is a 12,000-square-foot, townhouse-style apartment building located at 117 East 69th Street in New York City. It was purchased by Jim Henson in 1977 for $600,000 from the New York State Pharmaceutical Association.[1] The location became the New York headquarters for Henson Associates from 1978 until 2003, when the company moved most operations to their Charlie Chaplin Studios location in Los Angeles and relocated a downsized New York office to Broadway.

Home for several years to the Muppet Workshop, the townhouse was lavishly decorated with artistic furnishings and relics reflecting Jim Henson's career. Some of these modern day tapestries have been seen in Jim Henson: The Works and in the documentary Henson's Place. The building was often subject to tours given by office employees, which included a fact sheet detailing many facets of its inner recesses. Details from these sources have been used to augment this article.

The house was built between 1928 and 1929 for Beekman Winthrop, the former Governor of Puerto Rico; the architect was Julius Gaylor. In 1929, the house contained over 20 rooms, and was used as a residence for only a decade before it sat empty for many years prior to being remodeled into offices and lecture rooms in 1951.[2] The only visible outdoor alterations made to this building were after Henson purchased the building -- the lily pad stained glass windows surrounding the front door.

The Foyer contained a glass display case, where the display was changed to reflect the season, holiday, or current project of The Jim Henson Company.

Above the door was the sign from the 1986 PBS documentary, Henson's Place.

One entire wall in the front lobby of the building was covered in a mural painted in oil on canvas by Coulter Watt. It depicts a large number of Muppet characters created up to 1984 sitting in the house of The Muppet Theatre. A row of authentic theatre seats from the Helen Hayes Tappan Zee Playhouse in Nyack, New York, lined the front of the mural. After the townhouse was sold, the painting was moved to Henson offices in Los Angeles.[3]

The lobby's front desk was designed by Warren Hansen and built by Frank Pollaro. Inscribed in detail on the outside panels of the desk are additional wood carvings by Michael Frith. It contains 120 different types of veneers, and took three years to complete. The desk is now housed in the Henson office in Queens, New York. 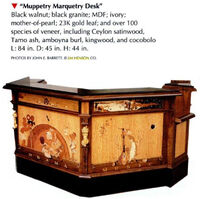 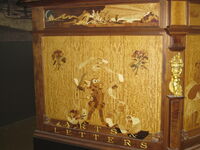 Left side of desk 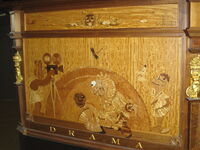 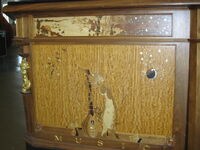 Right side of desk 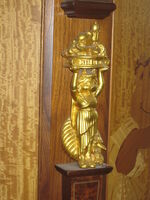 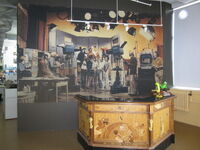 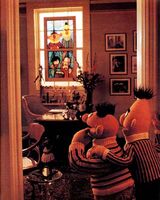 "The Great Hot Air Balloon Circus" is a sculpture created by John Henson and John Kahn, which began in the lobby at the base of the spiral staircase and continued up to the fourth floor. It consists of wire, wood, and metal, as well as PVC figures of the Muppets. This sculpture was temporarily on display between the first and second floors of the flagship World of Disney store on Fifth Avenue in New York City.

The lobby's marble floor featured the company's original ha! logo, inlaid in brass in the marble floor. A replica of the pediment over the entrance to the Muppet*Vision 3D theater hung above the doors leading to the Awards Room. The commemorative plaque from Jim Henson's 1991 unveiling of his star on The Hollywood Walk of Fame also hangs in the lobby.

Located on the first floor of the townhouse, the awards room houses only some of the countless awards that have been bestowed upon Jim Henson, the Muppets, and the Jim Henson Company. Included in this display are many of the awards received, including a sampling of Emmy, Grammy, George Foster Peabody, ACE, and Writers Guild of America awards. 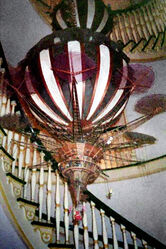 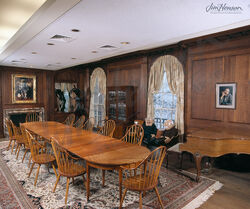 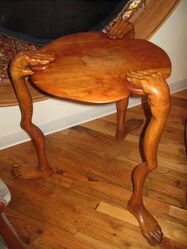 A table in the Townhouse, crafted by Andrew J. Willner
Add a photo to this gallery

Retrieved from "https://muppet.fandom.com/wiki/Henson_Townhouse?oldid=1318286"
Community content is available under CC-BY-SA unless otherwise noted.