Hey Cinderella! is a one-hour special which tells a cracked version of the classic fairy tale, "Cinderella". It debuted on the Canadian network CBC on March 16, 1969. It was broadcast in the United States of America a year later, debuting on ABC on April 10, 1970.

King Goshposh decides to hold a masked ball so that his son, Prince Arthur Charming, can choose a girl to marry. The Prince dislikes the idea because he feels that all the girls he knows are snobs, and he takes a walk in the garden (which he's not very adept at maintaining), where he discusses the problem with Kermit the Frog. (Kermit's advice: forget gardening, stick to being a prince)

Cinderella, whose cruel Stepmother has ordered her to perform an unpleasant chore, meets the Prince and mistakes him for a gardener. The Prince is delighted that Cinderella doesn't recognize him; he withholds his true identity from her and tells her that his name is just Arthur. Manipulating Goshposh to allow for commoners to attend the ball as well (under the king's condition of "No Frogs" to keep Kermit out), Arthur secures Cinderella a means to come as well. But although her stepmother tries to prevent her from attending, Cinderella's Fairy Godmother comes to the rescue and prepares her for the event.

After a bit of coaxing, Kermit becomes the footman for Cinderella and brings along his friend, a monster named Splurge, to help escort Cinderella to the ball. Yet it is there where a case of mistaken identity threatens to keep the young lovers apart -- the Prince is still smitten with the servant girl whom he met in the garden, and Cinderella pines for the gardener Arthur (without mentioning all the other chaos going on around them with the ball itself).

Writers Jon Stone and Tom Whedon originally conceived the project in 1965 as a television series based on Snow White. A pilot script was commissioned by CBS, and Jim Henson signed on to create and perform Muppet characters for the show. Although CBS eventually passed on producing the pilot, it was taken to ABC, who approved it on the condition that it be based on a different fairy tale. The half-hour pilot, changed to center around Cinderella, was Henson's first collaboration with Jon Stone and composer Joe Raposo. The series again was not picked up and the pilot went unaired. However, Henson expanded the concept to an hour-long special, retitled Hey Cinderella!, which reunited much of the original creative team; including Stone, Raposo, and Muppet performers Frank Oz and Jerry Nelson. A number of elements from the pilot were refitted for the special, including the song "If I Could Go Dancing."

Filmed in Toronto, Canada in the fall of 1968, the special featured Kermit as a frog for the first time, redesigned with a fringed collar and flippers. While Hey Cinderella! was shot less than a year before Sesame Street went into production, Kermit was already recognized as a frog by the time the special was broadcast on ABC in April 1970, several months after Sesame's debut. In effect, the initial U.S. airing of Hey Cinderella!, which was sponsored by R. J. Reynolds Tobacco Company, drew some criticism, particularly with Kermit providing commercial lead-ins. Because of this, various news sources (namely Look and Time magazine) cited that Kermit would be dropped from Sesame Street come the second season, but ultimately, he returned for future appearances.[1][2] 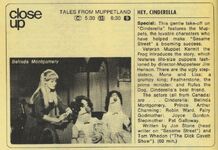