Hillary Rodham Clinton (b. 1947) served as the U.S. Secretary of State from 2009 to 2013. She was the First Lady of the United States from 1993 to 2001 and she served as the junior Senator from New York from 2001 to 2009. In 2008, she campaigned for the Democratic Party nomination of the US Presidential election ballot, and subsequently in 2016 became the first woman to win the nomination.

On January 19th, 1993, as part of Bill Clinton's first Presidental Inauguration festivities, the Disney Channel put together an "Inaugural Celebration for Children" concert at the Kennedy Center in Washington, D.C. The concert was hosted by Markie Post, and included performances by Mr. Rogers, the Adventures in Wonderland cast, and the Muppets. Kermit, Gonzo and Rizzo appeared in four sketches during the hour-long concert.

At the end of the concert, children's musician Raffi played "This Little Light of Mine," inviting all of the performers to join Bill and Hillary Clinton onstage. Steve Whitmire and Dave Goelz came on with Kermit and Gonzo, and Whitmire crouched down behind the Clintons, perching Kermit up on Hillary's shoulder as they sang. The camera held for a minute or so on this scene, and an AP photo of Kermit on Hillary's shoulder appeared on front pages around the nation.

In 1993 Clinton, as First Lady, appeared on Sesame Street in an insert with Rosita and Big Bird for Episode 3136 where she discussed health tips. The segment was filmed on October 14, 1993 at 10 am.[1]

Big Bird and Alice Snuffleupagus appeared in an event in the White House sculpture garden alongside first lady Hillary Clinton as the White House stepped up its effort to save federal funding for public television.[2]

When Clinton appeared on The Rosie O'Donnell Show on February 3, 1997, Oscar the Grouch maneuvered a meeting with the First Lady, where she presented him with trash from the White House.[3]

In 2005, Clinton, as a Senator, recorded a public service announcement with Elmo and Rosita as part of the Healthy Habits for Life initiative.

Appearing on Late Night with Jimmy Fallon in April 2012, Jason Segel mentioned getting a rejection letter from Clinton in regards to appearing in a sequel to Forgetting Sarah Marshall. The letter explains that she's too busy at the moment, but that if she agreed one day, her "only condition is that there be Muppets involved, and that is non-negotiable."[4] 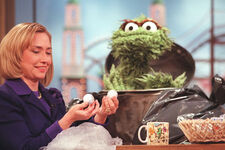 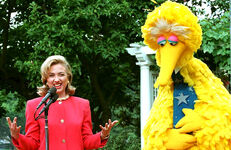 Clinton with Big Bird on the grounds of the White House. 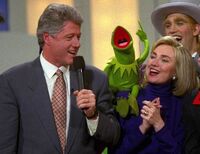 Kermit with the Clintons

Wikipedia has an article related to:
Hillary Clinton
Community content is available under CC-BY-SA unless otherwise noted.
Advertisement